A Pack of Turkeys

Find this article at:
go.ncsu.edu/readext?903134
— Written By Simon Gonzalez (2 months ago)

The two toms that received a Thanksgiving presidential pardon and are now housed at NC State are symbolic of the strength of the North Carolina poultry industry.

Before they were Chocolate and Chip, before their stay at the opulent Willard InterContinental Hotel in Washington, D.C., before their moment in the national spotlight on the South Lawn of the White House, and before being transported to their first-class accommodations at NC State, the two North Carolina-raised turkeys pardoned by President Joe Biden on Nov. 21 were simply Orange and Blue.

The names didn’t come from the uniform of a favorite team or university, or a child’s favorite colors. In fact, they weren’t really names at all.

“The identification on one of them’s orange and on the other one it’s blue,” Ronnie Parker said.

Parker is the general manager of Circle S Ranch, the poultry producers in Union County that supplied the turkeys for this year’s traditional presidential pardon. He is also the chairman of the National Turkey Federation (NTF), and, along with Circle S Ranch president Chad Starnes, a longtime partner of NC State Extension.

“Circle S and Ronnie have been good partners with Extension throughout the years,” said Richard Goforth, Extension area specialized agent for poultry. “Ronnie has been very active with the Turkey Industry Days committee, helping come up with speakers for many years. The Starnes family has certainly embraced Extension and been supporters at the local and state level.”

As chairman of the NTF, Parker had the right to provide the birds for this year’s White House ceremony. Back in July, Parker and Starnes isolated a small flock of mature males that had the potential to become ideal representatives of the ranch and the state’s turkey industry. A mini pageant ensued, with the toms “competing” in beauty and poise categories. 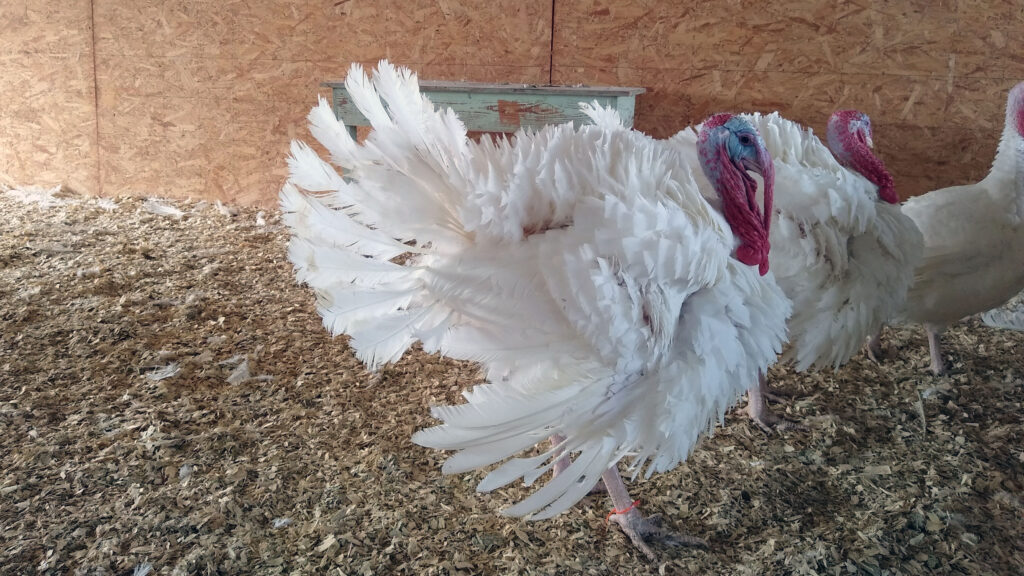 “Orange” (foreground) and “Blue” (background) had the ideal combination of behavior and aesthetics and were selected to go to the White House to be pardoned.

“Over the last 18 weeks we’ve been looking at the birds every day,” Parker said a few days before taking the birds to D.C. “When that turkey gets to Washington it has to sit on a table to be pardoned. We started working with the turkeys and if one responded the way we wanted them to, we put an ankle tag on them so we could identify them. We started scoring ‘em over the last four or five weeks — how they walk, how they strut, how the feathers are displayed, all those things played a part. The cream always rises to the top. The two that presented themselves the best are the ones going to the White House.”

The turkeys with the orange and blue tags won, and were renamed Chocolate and Chip by White House staff.

Harry Truman was the first president to receive a live bird from the National Turkey Federation, starting what has become an annual tradition. It is believed that some presidents received the gift and enjoyed a tasty meal, but thanks to the benevolence of George H.W. Bush in 1989, it’s now accepted practice that the turkeys will receive a presidential pardon, saving them from the Thanksgiving table. 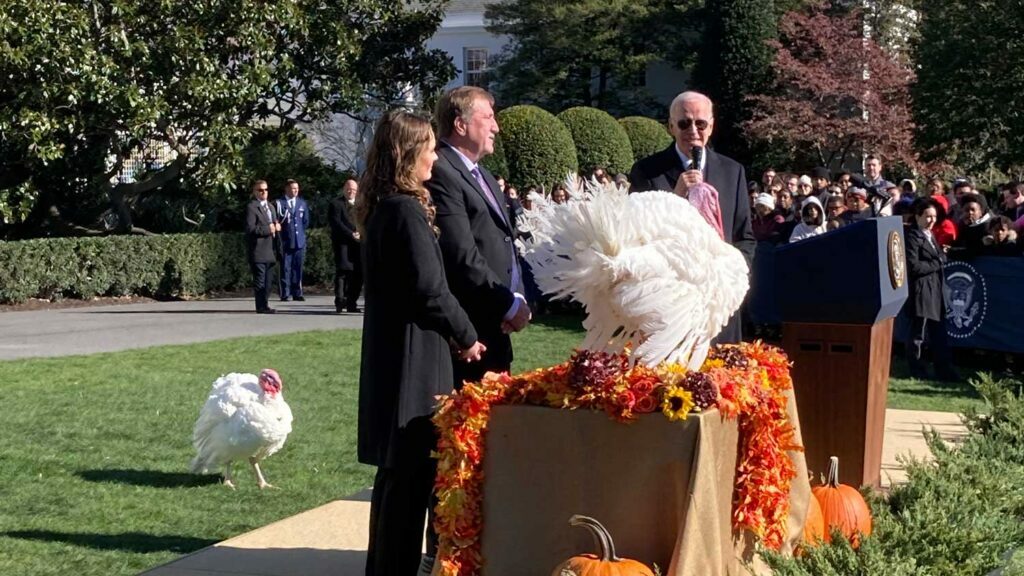 Circle S is proud of the honor, just as it is proud of its history and its role in the North Carolina and national turkey industry.

Samuel Oren Starnes was the first family member in the poultry business.

“My grandaddy started out in the egg layer business and had egg routes,” Chad Starnes said. “He was a merchant marine who saw famine and hunger and wanted to come back and do something about that.”

His son, Samuel Oren Starnes Jr., incorporated the business in 1972 after taking short courses in poultry production at NC State University following a stint in Vietnam.

“Extension played a big role when my dad was growing the business,” Chad Starnes said. “The industry as a whole was learning more about nutrition, and a lot of that came from NC State.”

Chad Starnes currently oversees the turkey production operation. The ranch also grows about 8,000 acres of corn, wheat and soybeans, most of which goes into turkey feed. His brother, Travis, runs the agricultural side.

“It’s something we take a lot of pride in,” Starnes said. “We use everything. We take the fertilizer and put it back on to grow our crops. We try to take care of conservation.”

Lexi recently joined the company in the accounting department. Chad’s son, Sam, is a freshman at NC State majoring in poultry science in the College of Agriculture and Life Sciences. 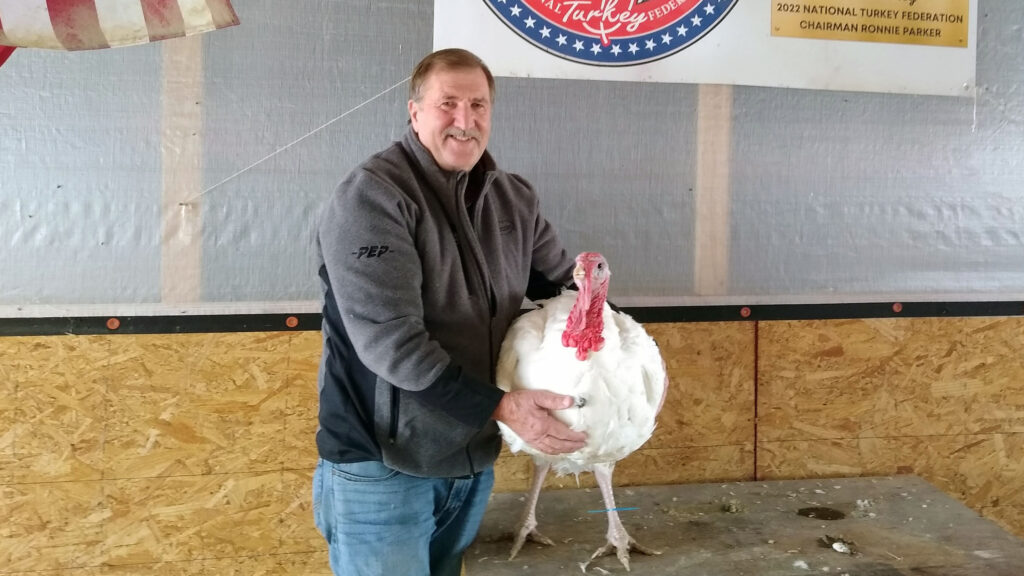 Ronnie Parker, general manager of Circle S Ranch, with one of the turkeys that received a presidential pardon at Thanksgiving.

Parker came on board about 25 years ago and helped the Starnes family grow Circle S into one of the biggest turkey ranches in the state and country. They expect to produce 9-10 million head next year, which they say would rank in the top three in North Carolina and the top five or six in the U.S.

The company is big enough to employ poultry professionals, but still relies on the expertise of NC State Extension agents and publications.

“Extension is a liaison for what’s going on in the industry locally with laws and regulations and state changes that may come in, or when disaster hits,” Starnes said. “When we have to work through the government agencies, they make sure we are doing the right things.”

North Carolina is the No. 2 producer of turkeys in the nation according to number of head, and likely No. 1 in terms of weight.

“We’re definitely proud of what we do,” Parker said. “My life is very rewarded by being in the turkey industry, for sure. Feeding the world, you’ve got to take pride in that. We’ve got a job that will be there forever if we do our part to make it work. Everybody has to eat. We feel like we’ve got a very good product, and there’s a lot of good protein in turkey.”

While Circle S had the honor of sending turkeys to Washington, it’s symbolic of the strength of the industry in the state.

“This is just the same as Christmas tree growers are proud when one of the trees from North Carolina is the White House Christmas tree. It’s a very similar distinction,” Goforth said. “We are very proud of our agriculture industry overall and certainly proud of our poultry industry.”

Goforth is one of four Extension area specialized agents working with poultry. They serve as liaisons between the cutting-edge research coming from CALS’ Prestage Department of Poultry Science at NC State and local Extension livestock agents and producers throughout North Carolina.

Related: How That Chicken Got to Market

“We help local livestock growers with small flocks, and we work directly with the commercial growers on waste and mortality management issues,” Goforth said. “I write a lot of waste nutrient management plans. They have to figure out what to do with the manure that comes from the operation. The plan incorporates regulations and record keeping as well as soil samples and analysis.”

The strength of research from NC State, expert help from Extension, and the dedication of poultry producers large and small adds up to a very strong industry in the state. Chocolate and Chip received a presidential pardon, but there were plenty of birds remaining to help feed families at Thanksgiving and throughout the year.