Find this article at:
go.ncsu.edu/readext?884840
— Written By Simon Gonzalez

There’s palpable excitement in the air as the lazy, hazy days of summer give way to back-to-school time.

Oh sure, there’s a little grumbling about ending extended vacation, having to get up early again, and just in general school. But underneath the virtually required moaning is the anticipation of reuniting with friends, meeting new teachers, the opportunity to learn, extracurricular activities — and in the case of the 4-H GIS club in Wake County, the chance to defend international and national titles.

The Wake County GIS club comprises high schoolers from Raleigh, North Raleigh, Morrisville, Cary, Fuquay-Varina and Rolesville. It is one of dozens of 4-H afterschool programs across the state, and one of many that focus on STEM (Science, Technology, Engineering and Math) education.

The club, under the leadership of Thomas Ray, NC State Extension 4-H agent in Wake County, returns to school after setting a high bar last year. The students took first, second and third in the 2022 International Esri GIS User Conference Map Gallery contest in the student division. The National Association of Extension 4-H Youth Development Professionals awarded the club the Specialty Award for Excellence in Geospatial Programs for its work looking at health issues specific to Black communities.

“As a club, to get those awards on an international scale shows the results of our hard work,” said Nikhil Patel, a senior at Enloe Magnet High School in Raleigh who took the lead on the project that won first place at the international conference. “It’s nice to get recognized on that kind of scale. It shows what we do as a club.” 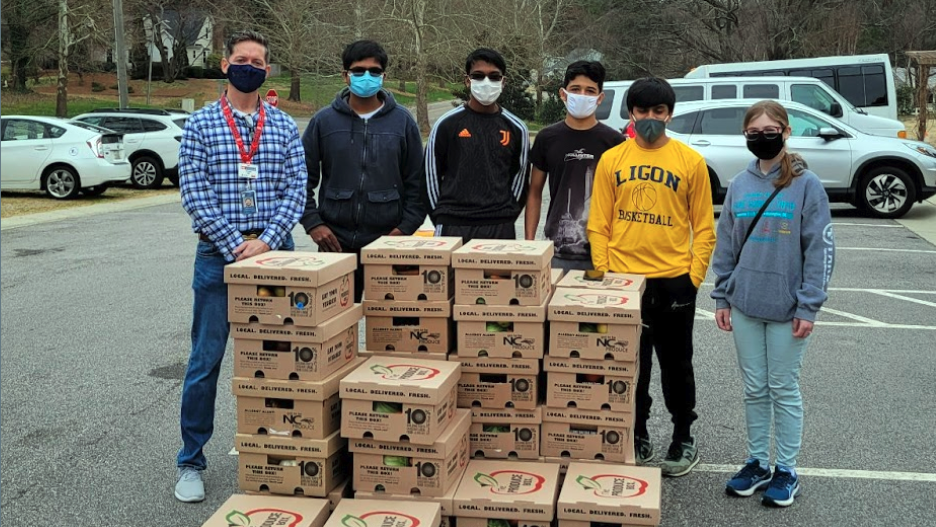 Data gathering for a GIS map often involves legwork. Members of the Wake County 4-H club visited local food hubs, including this one at Kirk of Kildaire Presbyterian Church in Cary, for a project on food insecurity caused by COVID-19.

NC State Extension provides more than 4,000 4-H activities across North Carolina for youth between the ages of 5-19. They include community and project clubs, special interest programs, school enrichment programs, and afterschool programs. NC State Extension 4-H gives youth a chance to explore their own interests – from photography to shooting sports, from healthy cooking to raising animals.

“We use GIS as a platform to visually represent data,” Ray said. “Charts, bar graphs, all of those things are helpful. But when you can see where things are taking place, it can add a dimension to the information. There’s a whole suite of statistical products within GIS we can use to make sense of what we’re seeing. It also helps us make recommendations, like maybe this should be over here, or this particular issue needs to be addressed because it’s happening in this community.”

Ray joined the Wake County 4-H team in 2006 after teaching math in West Virginia and Fuquay-Varina for more than a dozen years. He started the GIS club the following year.

“By trade I’m a math teacher,” he said. “I came to 4-H to support extracurricular programs, and to bring a STEM emphasis. I went to an afterschool conference and met a wonderful lady, Esther Worker, who has recently retired from Esri. She introduced me to a grant program where we could get the software. I said OK, that sounds great.” 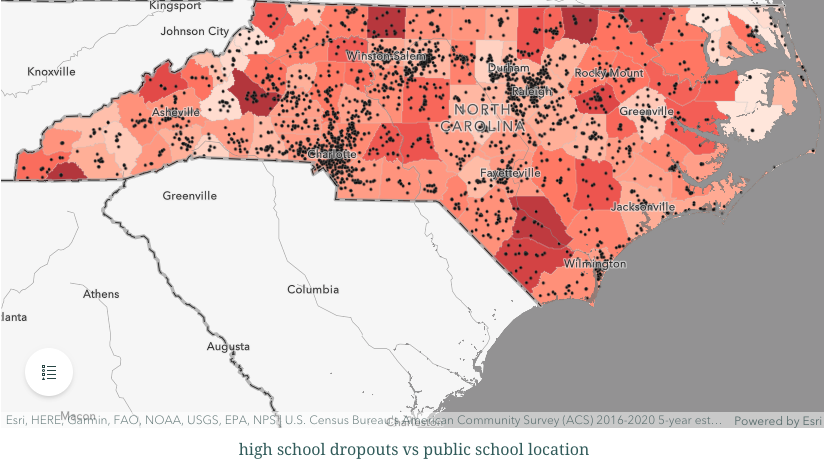 Esri is a leading company in GIS software. The grant enabled the Wake County 4-H GIS club, as a youth-serving educational organization, to access the software at no cost.

“That is huge,” Ray said. “NC State, North Carolina government, Wake County government, UPS, and different businesses that use GIS, they pay a lot of money for every license. And we pay zero dollars, thanks to the generosity of Jack Dangermond and Esri.”

The 4-H’ers began with geocaching and GPS applications before moving to more demanding work. They quickly proved adept at the skill.

“We’ve definitely had our young people making an impact from the very beginning,” Ray said. “Some of our original maps looked at gang tagging in the community. One of our young people was formerly gang involved and was able to basically tell a story from an image of tagging. He could tell you what was going on with that territory and how to make sense of it. We mapped it all out.”

The national 4-H award earned last school year came from a project for the Center for Black Health and Equity (formerly the National African-American Tobacco Prevention Network). The organization was investigating health issues specific to Black communities across the U.S., and the Wake County 4-H GIS club was asked to look at data in and around Raleigh.

“We took it a step further and generated algorithms to demonstrate the disparity data in communities across the U.S. and created a web application for them, which is now on their website,” Ray said. “So they got a little more than they asked for, but we like to overdeliver I think.”

The awards earned at the Esri international conference were for maps showing food access in Wake County, the correlation between income and high school dropout rates across North Carolina, and its work for the Center for Black Health and Equity.

A map from the Wake County 4-H GIS club showing areas lacking food access during the height of the COVID-19 pandemic.

The work goes beyond having fun and winning awards. The Wake County GIS club is producing information that has practical applications. Some of it has been acted on.

“I sit within Wake County government as well, and early on during COVID I was at the table with the school system and health and human services and other community-based partners,” Ray said. “Our youth were working with me, and we mapped out where there were individual and community needs. We mapped out existing resources, and made recommendations about where we needed to place additional resources. That work ended up flowing out into our COVID response teams. Those maps we were generating ended up being very useful within the county.”

The club tends to attract students who are interested in data, math and/or programming. But there is a common thread that is even more powerful than a general love of numbers.

“They are passionate and driven and motivated to make a difference,” Ray said. “I have two new youth starting this fall, that’s exactly why they wanted to join. They saw the level of impact. This kind of work is helpful at the community level but it can scale up to a number of levels — county, or even state, and potentially beyond when we start understanding what’s happening and where.”

The ability to make a difference, even while in high school, is the primary reason Brock Reese, a sophomore at Fuquay-Varina High School, joined the club.

“The idea of using the data to show what is happening kind of got me hooked,” he said. “I did a map on how income rates in rural populations affect crime rates in North Carolina counties. I overlaid data of crime levels we got from the North Carolina State Bureau of Investigation with some data on the income levels in rural populations in each county. Just analyzing it gave me some shocking conclusions. That data is very powerful. The cool thing about GIS is you can send these maps to people like politicians.”

Club members have the freedom to pursue what they are passionate about, either on individual or collective projects. Reese, a self-proclaimed car guy, thinks cars powered by fuel produced by carbon capture could be an alternative to electric vehicles.

“Carbon capture is not a concept people are talking about,” he said. “What I’m thinking about is a map that would have atmospheric data of high levels of CO2 and then making a layer with availability for on-site carbon capture plants.”

As a teacher, Ray delights in watching his students grow and learn. Some are interested in taking their GIS knowledge to the next level, but even those who go on to other fields take something away from their time in the 4-H club.

“It’s cool watching how they develop and gain some skills,” Ray said. “Some go into GIS. I have one who works with a grassroots organization in the eastern part of the state who is working for the USDA and is also a grad student at NC State. Another one works with Esri. He’s a Spanish speaker, and he’s working with a lot of their Latin American clients. Many do not. I have one that’s in sales with Procter & Gamble, one is a teacher in Durham, one is a day trader. They’ve gone on to do all kinds of different things. But that all have that extra geospatial awareness piece that can be something they apply anywhere.”

Sumedh Kotrannavar, a sophomore at Enloe, credits his 4-H leader for creating the atmosphere for enhancing their skills.

“Dr. Ray is a great person,” he said. “He’s so enthusiastic and willing to help in what project you’re interested in. It’s so fun to be around him.”

The Wake County 4-H GIS club is one of only a couple in North Carolina. Ray hopes the number grows.

“I’ve heard from others across the state who want to use GIS in what they do,” he said. “I’ve tried to make myself available for people who want to do that. We also host a state-wide school-based youth GIS competition every year, hoping that will spark an interest in young people who want to pursue GIS and potentially get clubs started in their own communities.”