From Farm to Vacation Rental Table

Find this article at:
go.ncsu.edu/readext?876553
— Written By Simon Gonzalez

The best vacations are immersed in local experiences — sites, culture, fun and food. Anything else, Duarte Morais suggests, could be termed “fake tourism.”

Morais is an NC State Extension tourism specialist. His job includes efforts to funnel tourists — and tourism dollars — to authentic experiences that can only be found at the vacation destination.

“The pitch is to make experiences locally specific and locally relevant and locally meaningful versus an entertainment that can be copied everywhere,” he said.

That includes an initiative that expands on the popular farm-to-table trend. Instead of going to a restaurant to eat locally produced food, at several locations around the state visitors can participate in a farm-to-stovetop program called Vacationer Supported Agriculture (VSA).

Related: Meet the farmers who supply produce for some of the state’s top restaurants.

VSA is a project led by the P1tLab at North Carolina State University and NC State Extension that connects small farmers with new opportunities to increase revenue through direct sale of fresh produce to vacationers.

“The people who are buying this, they understand the value of local food,” said Becky Bowen, program manager for community development with NC State Extension.

It is modeled after Community-Supported Agriculture, the program that connects North Carolinians with local farms to receive regular deliveries of fresh produce. A VSA is a CSA-for-a-week, giving visitors the opportunity to order fresh, local food that is delivered to the door of their rental property.

“It’s a way to help farmers tap into the tourist economy,” Morais said. “Tourism is a highly competitive and integrated industry. Usually, destinations are supported at the county level by destination planning and marketing organizations that are funded by occupancy tax. The tourism system is designed to create more occupancy tax. There’s not really a lot of mechanisms or people devoted to helping the local community become involved in tourism.” 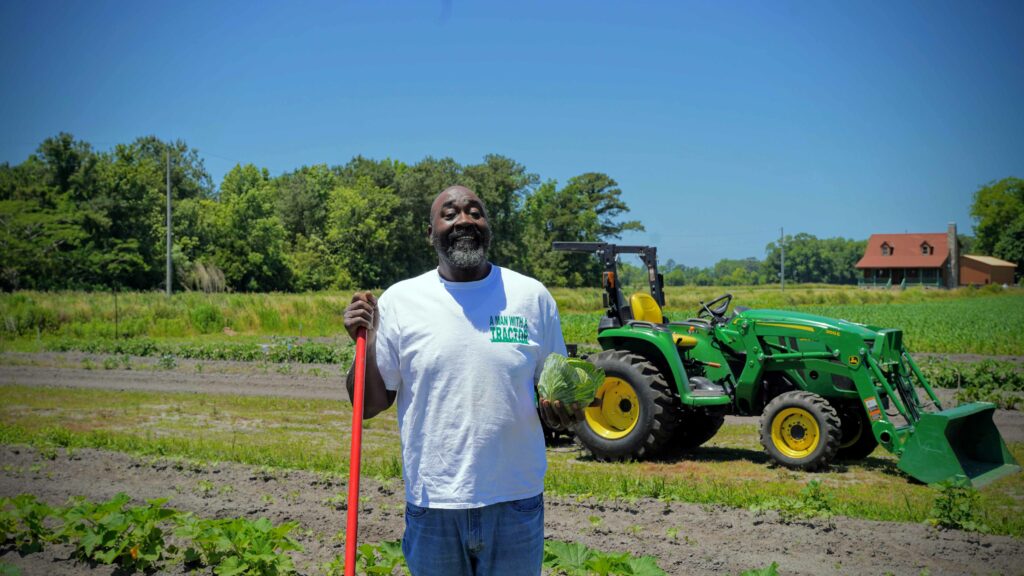 Thomas Midgette, a farmer in Hyde County, supplies produce for the VSA program.

The program is a partnership between Extension, farmers and vacation rental companies. Extension serves as a conduit between the farmers who supply the produce and the rental companies who offer VSA to their clients.

“We work with the supply side, with the farmers, to help them get organized and help them understand what the tourists want,” Morais said. “We also work with the hospitality side, the vacation rental companies, to explain to them why they would benefit from showcasing these products to their guests. We tell the companies how much the vacationers appreciate this and how it’s important for them to engage the local farmers. When they come onboard they generally stick with us.”

The idea came from a discussion in Morais’ class on tourism economics.

“I was teaching economic leakage — how tourists can spend a lot of money on their vacation but only a portion stays locally,” he said.

A student from the Outer Banks said he’d seen it in action. Tourists coming to stay for a week would often bring coolers full of food on a tray on the back of their vehicle. They weren’t even going to a local grocery store, let alone a farmers market.

“I had a coffee shop meeting scheduled with Becky (Bowen) and a couple of other colleagues just a couple of days later,” Morais said. “I brought it up and said can we imagine a solution for this? You guys know groups of farmers, you have Extension partners in these counties. Could we imagine a way of creating a CSA for just a week? They added their ideas to it, and that’s how it was born.”

The first baby steps occurred in 2018 with a pilot program in Ocean Isle Beach in Brunswick County, working through a Columbus County nonprofit called Men and Women United for Youth and Families. Community farmers from Brunswick, Columbus and Bladen counties provided the food, which was delivered by Men and Women United’s Youth Ambassadors. Extension centers in Brunswick and Bladen counties provided training in food safety and food handling.

“It started as part of a grant-funded project through USDA, a farmers market promotion grant,” Bowen said. “It was almost an afterthought. We weren’t sure if it was going to go anywhere. We had other programs and strategies we were also implementing as part of that grant. We sold a little over $5,000 worth of produce, which doesn’t sound like that much. But it was enough of a success, and we did get positive customer feedback, that we felt like it was worthwhile continuing.” 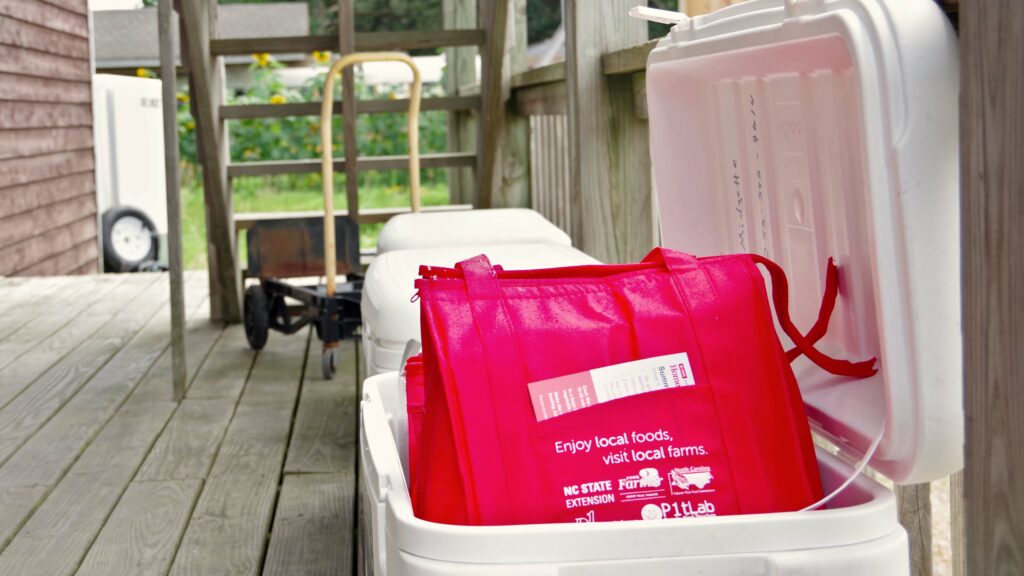 VSA expanded into five beach communities in Brunswick County the following year, and then began moving north. With support from the North Carolina Tobacco Trust Fund, the program continued to grow. By 2021 it was offered in seven coastal counties where vacationers typically stay for a week, with total sales reaching $91,397. Revenue is expected to grow again this year, in part because the season has expanded beyond the 12 weeks of summer. Tourists now can order provisions through the end of September.

Based on feedback from participants, the offerings also have grown. Customers have the option to add extras to their order.

The offerings on Ocracoke Island in Hyde County include fresh oysters, along with a uniquely authentic tourism experience.

“We help visitors preorder oysters that will be there when they arrive,” Morais said. “In addition, they can go out into the oyster bank with a farmer and learn why the farmer decided to live this life, and their multi-generational connection to the island.”

Extension agents have in-depth knowledge of the producers in their county, so they play an important role in introducing farmers to the program and making sure several of them have the opportunity to get a piece of the economic pie. 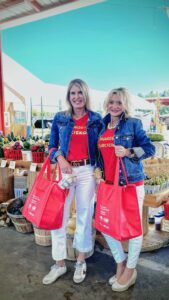 “The county agent, their role in general is to make sure this revenue coming from tourism is benefitting farmers in an equitable way,” Morais said. “They work with us to find farmers that are ready to be innovative, that are in a position to try something new.”

There is an intentional effort by Extension agents to include farmers from surrounding areas. Producers from 11 counties are involved in supplying fresh food to VSA subscribers in the seven counties.

Chris and Christina Braswell, first-generation growers who run Outlaw Acres Farm in Clyde in Haywood County, are among the farmers participating in the pilot program. 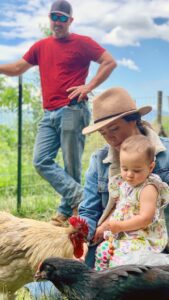 Chris and Christina Braswell of Outlaw Acres Farm are participating in the pilot program in Haywood County.

“We offer a bag with about 10 pounds of produce,” Christina said. “You can add half a chicken, a bouquet of flowers, a dozen eggs. It’s a chance to eat like you’ve gone to the farmers market. It is locally grown food that you know is in season, you know it’s going to be grown very well. It’s coming directly from the farmer, so you’re supporting the local farmer as well.”

Vacationers to the mountains tend to book cabin rentals over long weekends rather than stay for an entire week like they do on the coast. That can make it more challenging to find VSA subscribers. The Braswells had about 10 sales over the 10 weeks of the pilot program.

“I was pretty impressed for it being the pilot program,” Christina said. “I know it’s wildly successful on the coast. We’re still trying to gain traction.”

The benefits of VSA go beyond the dollars generated through subscriptions. Participating in the program often inspires producers to explore other out-of-the-box pursuits.

“When farmers become successful in something new, even if it’s something small like starting a VSA partnership in their county, that little success can lead them to try other innovations as well,” Morais said. “We have anecdotal evidence that’s happening with farmers involved in VSA. When they start working with us, they start understanding the tourists, they start understanding the hospitality companies, and that galvanizes them to try something else like CSAs or produce stands or supplying restaurants and things like that.”