Find this article at:
go.ncsu.edu/readext?861520
— Written By Simon Gonzalez

Daniel is a 14-year-old 4-H’er in Duplin County. Lemmy is the lamb he received as a participant in N.C. Cooperative Extension’s Leap Into Sheep program. The teen confidently speaks about caring for the animal — the twice-daily feedings, the steps to keep parasites out and warmth in, cleaning and grooming, exercising, teaching the lamb to brace so he’ll show well. Daniel sounds like a pro.

Lemmy stands by his side, placidly and companionably. The lamb occasionally nudges the human’s hand as he talks, enduring the halter he’s wearing without complaint, obediently demonstrating the brace position.

It’s pretty impressive, considering Daniel knew nothing about small ruminants a couple of months ago. 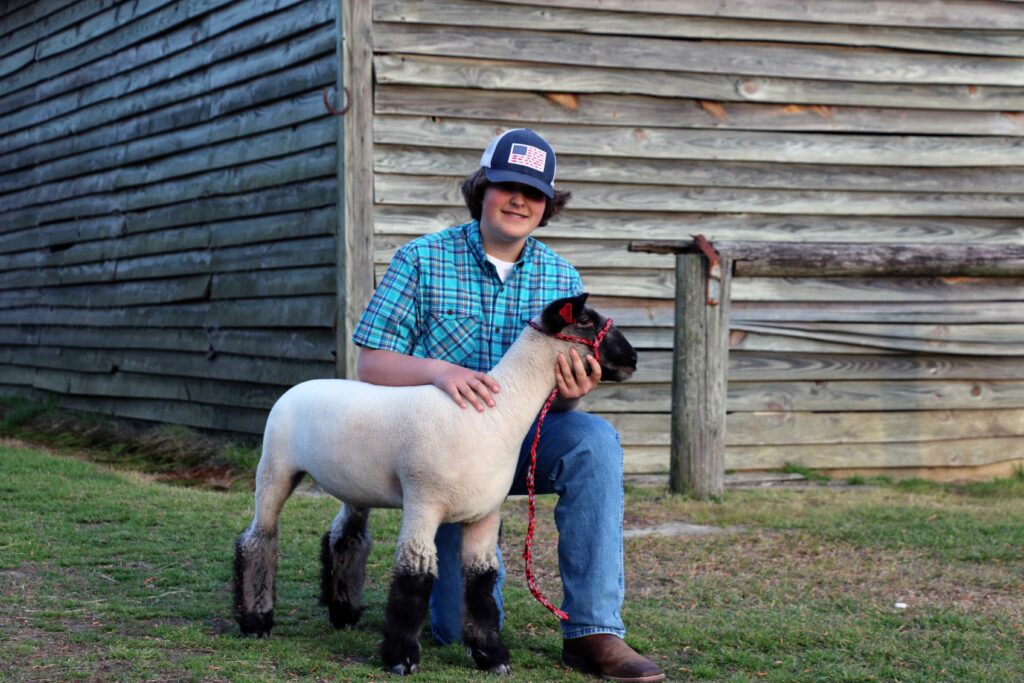 Daniel Grady with his sheep, Lemmy, at his home in Duplin County.

“We knew it was going to be popular,” Kendall said. “Our goal is to do it again for the same region, and we’re hoping that other areas will do it too.”

North Carolina 4-H is open to youth ages 5 to 19. The program is administered by N.C. Cooperative Extension agents in 101 centers across the state. Young people in urban and rural counties can choose from a diverse array of “learn by doing” programs, from photography to computers, from building rockets to raising animals.

Across North Carolina, youth involved in 4-H livestock programs are preparing for spring shows. Pigs, chickens, lambs, cows, goats, rabbits and more will be showcased before judges. Many of the animals will be auctioned at sales immediately after the shows.

“Definitely the highlight of livestock programs is going to the show,” Kendall said. “The fun part is making new friends and meeting people from all over the state.”

It’s a culmination of weeks and months of hard work for 4-H’ers who received their animals in the winter, attended classes on raising and showing them, and invested hours in care and training before stepping into the show ring.

Daniel showed Lemmy at the Coastal Plains Junior Livestock Show and Sale in Lenoir County the week after Easter. He also entered Lemmy in the East Coast Extravaganza in Rocky Mount in early March, where the lamb earned reserve grand champion honors in its class.

“After he’s gone I want to get a new sheep and do some fall shows,” Daniel said. “It definitely does boost your confidence. Even if you don’t win you always have the next show.”

Barney Grady, Daniel’s father, has enjoyed watching his son learn about how to care for the lamb.

“It’s a new experience,” he said. “We‘ve never had a small ruminant before. We have a few horses. We raise American Guinea Hogs, they’re a heritage breed. We started raising them about 2018.”

It wouldn’t have been possible without the personal attention of their local 4-H agent. 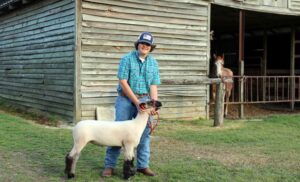 “Charmae has always been good about letting people know when something comes up,” Barney said. “When the lamb project came up, she said this is something you might be interested in. We had thought about getting into show pigs, but there’s a lot involved and we were not ready for that. When I mentioned the lamb project to Daniel, he was like ‘Yeah, let’s do it.’”

Kendall appreciates the accolades, but she is quick to pass on the credit. Even the best plans couldn’t come to fruition without partners providing the funding. In the case of the Leap Into Sheep program, the money came from local Farm Bureaus.

“It is hard to get new kids involved in livestock because it’s so expensive,” she said. “The lambs cost $350 apiece. That’s the bottom line.”

About 20 miles away from Daniel and Lemmy, just inside the Sampson County border in Turkey, North Carolina, a group of 4-H’ers is participating in a pig program. It’s a joint project between the Duplin and Sampson Extension centers. Like the lamb project, it wouldn’t have been possible without generous partners. In this case, Smithfield donated 20 hogs, the use of a facility to house them, and feed.

The 4-H’ers come out to the barn three times a week to work with their animals. The hogs are let out into a fenced enclosure while the youth, staff and volunteers clean the barn. They relish their freedom, rooting in the dirt and joyfully running around.

The youth are supposed to use this time to practice for the show ring, training their animal to walk in a circle in anticipation of being judged. It can be a challenge. Pigs are unruly. If there is a barricade up, they will attempt to knock it down. They weigh 220-plus pounds each, making it hard for the kids to herd them and keep them in line. 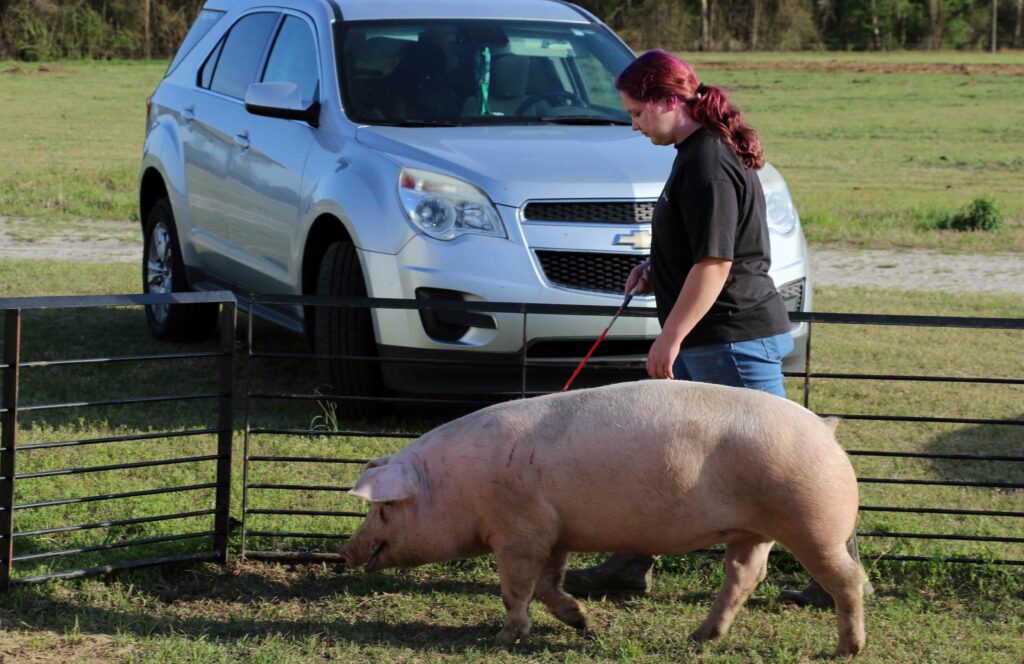 Kaylee Lackey works with her pig, Lilo, in Sampson County.

“They are very rambunctious,” said Kaylee Lackey, a 15-year-old who has been in 4-H since she was 5. “Washing them is not very much fun, I will say that. You get a bath more so than they do.”

Still, Kaylee manages to get her pig, Lilo, somewhat under control. She walks her in a circle, and persuades her to turn.

“You kind of just walk them around the ring and let the judge see it,” she said. “Basically, you are showing the meat, showing how nice and fat they are.”

The pig program is primarily for kids like Kaylee, who are interested in livestock but couldn’t keep a large animal where they live — in her case, within the Clinton city limits. 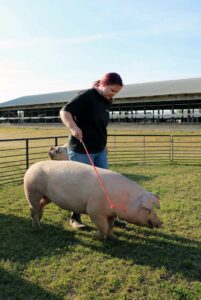 Kaylee and Lilo practice for the show ring.

“It’s giving the youth that live in cities an opportunity that they wouldn’t otherwise have,” said Elizabeth Merrill, a 4-H program assistant with Extension’s Sampson County Center. “A city like Clinton has restrictions on what animals you can have. You can’t even have chickens. What our kids in our cities can do is very limited. So being able to come and perform like this and raise an animal, it’s a great opportunity.”

Kaylee has learned a lot about pigs since she was given charge of Lilo.

“Every Monday and Thursday we do lessons,” she said. “We learn about different cuts of meat on the pig, different breeds, stuff like that. When my mom said you are doing the pig project, I said pig project, really? And then I got attached to my pig. I have really enjoyed coming out here and spending time with them and working with them. I might want pigs in the future to raise.”

She has learned about pigs, rabbits, chickens and other animals during her decade as an active 4-H’er. Perhaps more importantly, she has evolved from a shy child to a confident teenager. Kaylee was elected as the Southeast District president this year. 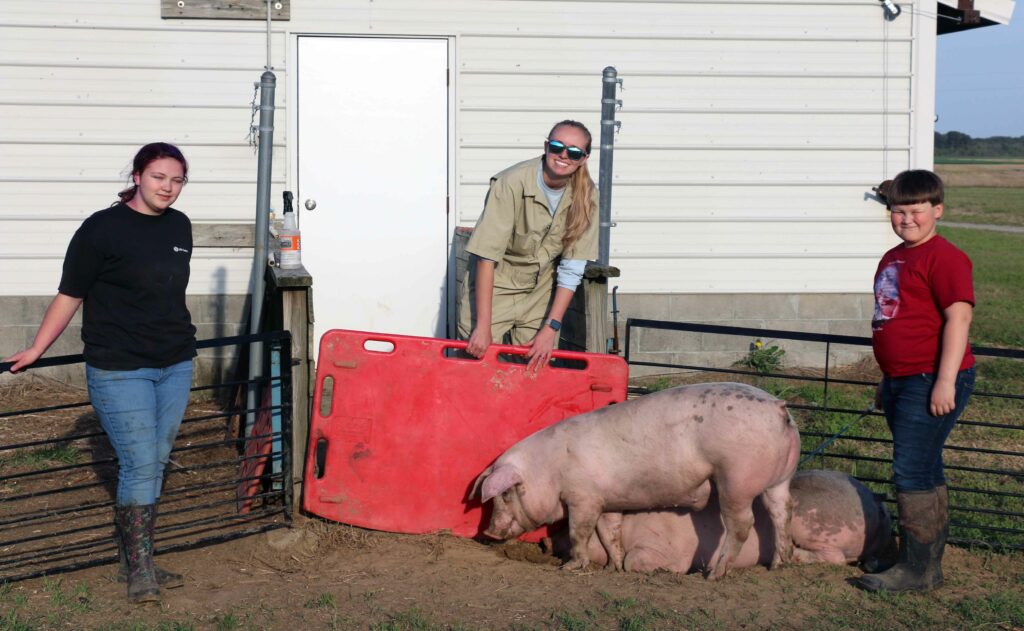 The transformation is part of the ethos of 4-H across North Carolina. Youth learn not only practical skills like how to care for livestock, but also life skills like leadership.

“It’s those types of opportunities that 4-H offers you,” Merrill said. “You have to have some level of self-confidence to show animals. If I had told Kaylee a couple of years ago that she would hold a district office she probably would have looked at me and said, ‘You’re nuts.’”

Jessica Hall, Extension livestock agent in Duplin County, also has seen 4-H youth blossom in all aspects of the program.

“What they put into it is what they’ll get out of it,” she said. “In most cases it’s a lot. They’ll come in shy, not knowing what they are interested in, and by the time they leave the program they know what they are passionate about. They’ve got those soft skills, the communication skills. They also have the knowledge of agriculture or robotics. Anything they want to pursue, they can do that.”

Discover more about Extension’s 4-H programs and how to get involved.